A Fund for Women has given Freedom Inc. a generous grant for $10,000! A Fund for Women's mission is to transform Dane County so that all women and girls thrive. We are grateful for this donation, which will help us to provide housing support to Black and Southeast Asian community members in Madison!

Thanks, A Fund for Women!

Call for the Immediate Release of Katoine Richardson

On Sunday Oct. 10th, 19-year old Katoine Richardson was heading home from work when Madison police officers chased him down and wrestled him to the pavement for breaking curfew. In the struggle, one of the police officers is believed to have shot the other officer with their service weapon, but in a pathetic attempt to avoid showing the community how incompetent they are, the police subsequently released a statement that heavily criminalized Katoine and implied he was the one who shot the officer. The statement described him as a “wanted subject” and completely failed to mention that he was just attempting to walk home after work when police began harassing him, chasing him, and brutalizing him.

This police statement led to multiple news outlets framing this youth as an attempted cop killer, many of which have still not corrected this false narrative despite court documents being released saying that Katoine never even so much as fired a gun, let alone shot someone. There is also ambiguity around if an officer was actually shot at all. In actuality, the police chased Katoine down, brutalized him, and kidnapped him for walking--an experience that is all too common for Black youth. This is also not the first time Katoine has been criminalized by police for simply existing--he’s been targeted for not being able to pay bond, being outside at night, and attempting to escape police violence. When the stories and statements came out implying that Katoine shot the officer his bail was set at a staggering $50,000--later reduced to $16,000. Katoine is currently still incarcerated, but the cops and news reporters whose lies further criminalized him are not currently facing any charges.

This traumatic experience has forced Katoine back into a cycle of criminalization that is made intentionally impossible for Black youth to escape. The police repeatedly emphasized that Katoine was holding a firearm as a means for justifying his violent arrest, but Katoine said he kept a gun on him because he did not feel safe in Madison. His public defender Stan Woodard shared that Katoine has experienced so much trauma at the hands of the police and the court systems that he was contemplating suicide when he ran from the police:

“Quite frankly he wanted to die. He just felt like things are just going so bad for him, he’s got these cases and he feels that some of them are not merit-worthy and as a result of that he wanted to give up.”

The police stopping, brutalizing, and kidnapping Katoine in no way served public safety. Their incompetence endangered the life of someone they were supposedly sworn to protect, as well as the lives of those on State Street, one of the busiest areas in Madison. This reckless, racist behavior again demonstrates why we do not need police in our communities when all they do is criminalize young Black youth, especially those who are low-to-no income, femme, trans, and queer. Many youth in a similar position to Katoine would have similarly chosen to risk their lives running from the police instead of turning themselves in and trusting the police with their lives.

Katoine’s bail must be immediately dropped. There is no reason why he is being held on bail when the fault of the accident is entirely on the officers involved. All other Black people must be released from systems of policing, including that of detention centers and cash bail. We must immediately defund MPD and abolish policing, close all prisons and jails, and instead invest resources into our own communities for community control and infrastructure that would keep us safe and our needs met.

If you are able, please donate to Free the 350 bail fund, so that we may continue our mission to #FREETHEMALL: 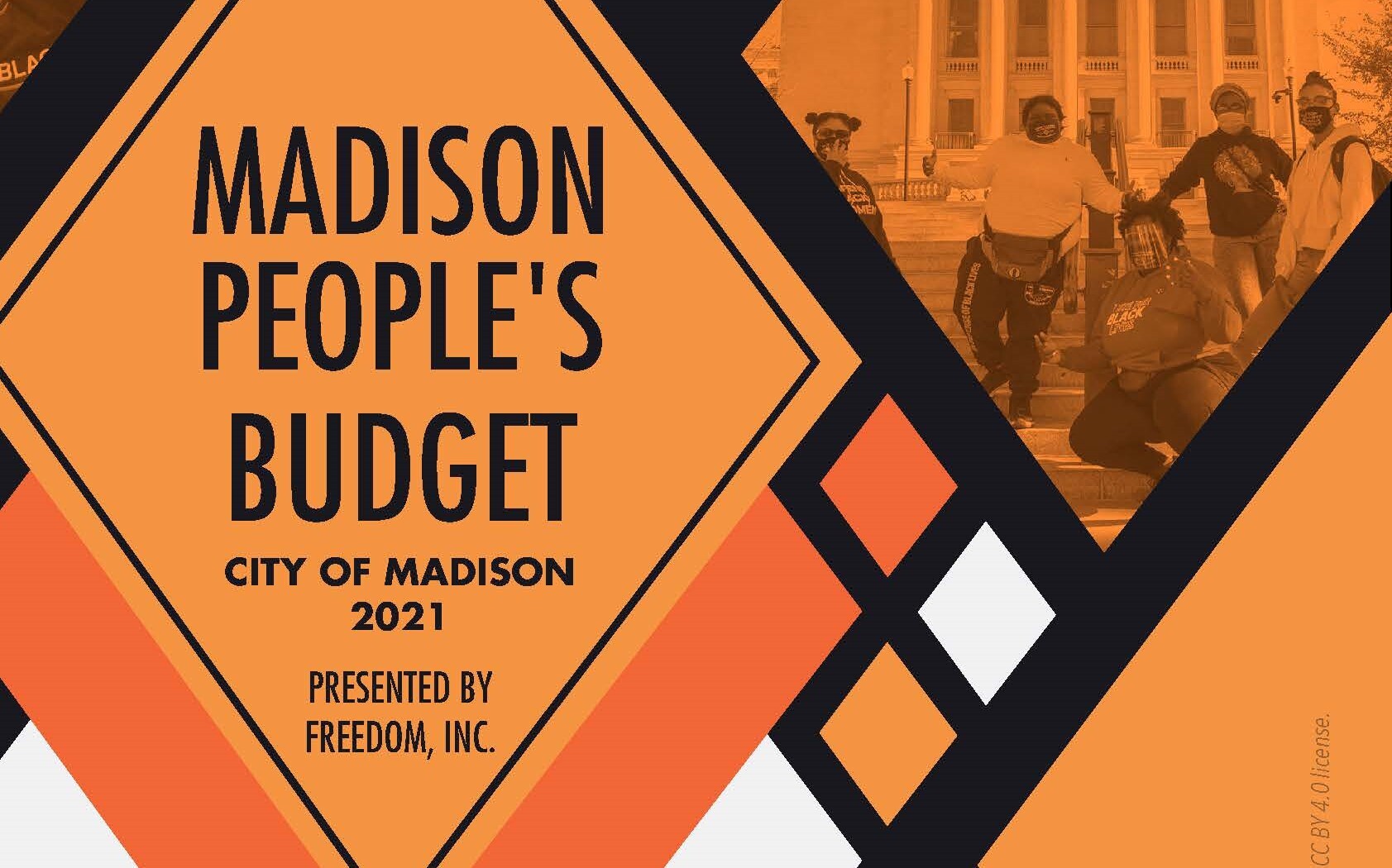 The 2021 Madison People's Budget is OUT!!! We gathered data from over 1,500 Madison residents and asked them to weigh in on the most crucial social structures at stake in next year’s city budget. We asked Madisonians about the kinds of resource investments they want to see in THEIR COMMUNITIES. We then held a number of community meetings to hear particularly from Black, Southeast Asian and other POC folks on their budgeting priorities. The linked PDF below is compatible with screen readers and includes tables and alt text for accessibility!

The full report can be read here: MadisonPeoplesBudget2021.pdf

If you have any questions about the report, please reach out to ikpachavi@freedom-inc.org

Yesterday, Freedom, Inc., Urban Tirage Inc., and the Party for Socialism and Liberation (PSL) united for an action to demand an end to racist police terror. We gathered thousands of community members to stand in solidarity with Minnesota and demand justice for George Floyd, Breonna Taylor, Tony McDade, Tony Robinson, and all slain Black people throughout the African diaspora. We demanded, and will continue to demand: defund the police, reparations for all Black people, release all incarcerated Black people from jail, get cops out of schools, and community control over the police.

Five years ago, when we protested for Tony Robinson, these same acts were not considered peaceful. We marched, we chanted, and we stood on the Capitol steps. We chained ourselves to the doors of the jail, in demonstration of our rage, of our hurt, and our pain. We were called thugs and violent antagonizers-- leading to the arrest of several Black leaders and demonstrators. Now, the antiblack media, elected officials, and some community leaders are using the events of last night to divide our community; to criminalize Black youth while holding us as the example of a “peaceful'' protest. This is indicative of the insidious nature of white supremacist patriarchal capitalism; changing the narrative as a matter of convenience to separate, divide and conquer, while avoiding accountability for the violence bestowed upon Black bodies at the hands of the State. Please recognize that this is one of the many ways white supremacist patriarchal capitalism is perpetuated by progressive liberal cities like Madison, WI.

We echo the powerful words of Assata Shakur: “It is our duty to fight for our freedom. It is our duty to win. We must love each other and support each other. We have nothing to lose but our chains.” Our organizations will not denounce any Black person's display of grief and/or rage. All actions against racist state violence are justified and we will not minimize these contributions to liberation. Please lend support by donating to the Free the 350 Bail Fund to provide support to Black folks who have been arrested https://bit.ly/3dnn6uY. Please also sign the Movement for Black Lives Petition https://m4bl.org and follow our organizations on social media for updates on actions and events.

On Wednesday, Madison Police Department Chief Mike Koval announced that he planned to initiate a wave of arrests that would predominantly target African American men.  This plan is an attempt to address the recent increase in gun violence in Madison, even though he admits that there may be no evidence connecting arrested individuals to any homicides.  We at Freedom, Inc. strongly condemn this plan as racist and dangerous, contributing to the already alarming over-representation of African American men in jail in Madison. 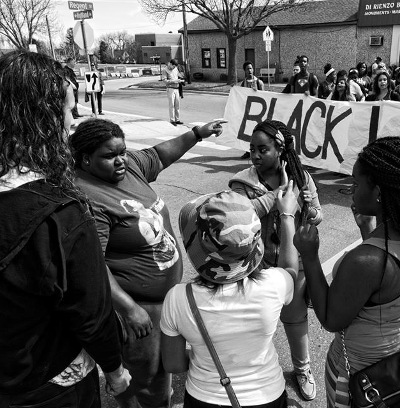 A campus-wide reception to honor the Outstanding Women of Color will be held on Wednesday, Oct. 7, from 5:00 p.m. to 7:30 p.m. in the Alumni Lounge of the Pyle Center at UWM. The public is welcome to attend.